The Opportunity Fund Project for opening up the Missing Piece --this is the current project which will, finally, start in 2016. The SW corner of the park will be accessible from the P-Patch to the OLA. This is the next step in completing the Preferred Site Plan. Next would be opening up the east hill of the park, which requires more fundraising/grants & Parks saying okay. Parks has been reluctant to okay this part due to maintenance. 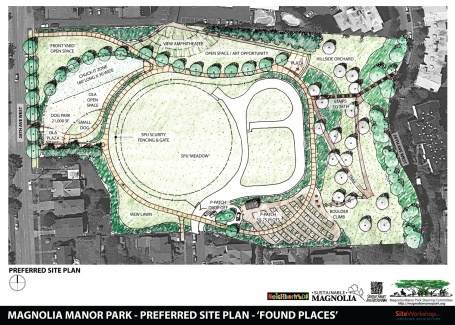 Where is Manor Park?

Magnolia Manor Park is located in the Magnolia neighborhood of Seattle, with entrances at 3500 28th Avenue West and due north of West Bertona Street on 27th Avenue West.

What is the history of Manor Park?

The reservoir was built in 1945 as an open reservoir and the entire area was open to the public. The park was accessible from all directions with a small parking area at the entrance on 27th Avenue West. People could walk right up to the edge of the water. Fencing eventually was erected around the entire SPU property, then more fencing so a pathway could be established on the north side of the property.

A new underground lidded reservoir was constructed between 1993 and 1995, as part of SPU’s Reservoir Covering Program. At that time, through negotiations with the community and the Department of Parks and Recreation, SPU agreed to open up the northwest section as a “passive park”. The remaining area was fenced off.

Why did changes occur at Manor Park?

In 2006, the Department of Parks and Recreation conducted a public process to identify potential Dog Off-leash areas (OLAs) in Queen Anne and Magnolia. A site located in Magnolia Manor Park was approved as a potential OLA site, pending approval from SPU, which owns the property on which the park is sited. (http://www.seattle.gov/parks/projects/OLA.htm) Prior to this the Park had served as an illegal dog park while eliminating the usual park activities at the site.

In 2010, SPU relocated one fence so the reservoir would be completely behind chain link fencing for better protection of the lid. Previously, Park users walked on a grassy area that was actually near/on the lidded reservoir. Unlike newer lidded reservoirs, the Manor Park reservoir lid was not designed/ built in such a way to accommodate secondary uses on the lid. SPU felt that heavy usage on that area posed a risk to the safety of the water supply. This change resulted in a reduction in the size of the Park (by about 8,000-10,000 square feet).

Why was the Preferred Site Plan created?

Sustainable Magnolia’s Local Food/P-Patch Team contacted P-Patch staff of the Department of Neighborhoods, regarding possible garden sites in Magnolia in 2010. The consensus was that Manor Park was well suited as a P-Patch site; relatively flat and full sun. After a meeting and walk-through with Parks and Seattle Public Utilities all agreed that a site plan was needed for Manor Park.

The Preferred Site Plan would open the park up to 4.3 acres (almost triple its current size) by reconfiguring the current fences and security gate to be within or just around the perimeter of the lidded reservoir with a legal set-back: and; would include walking trails, around and through Manor Park, and the now-completed OLA and P-Patch (about 65 plots).

The Preferred Site Plan would allow for the creation of a path to the east, allowing access for the first time to the many neighbors east of the existing park. There would be open space, informal play and picnic areas and be part of a two-part walking loop between MMP, Lawton Park and its new playground, Lawton School and the Lawton Ravine path. The Plan would be designed with sustainability and green practices so maintenance would be sustainable and minimal; with creative and attractive landscaping and park elements.

Who served on the first MMP Steering Committee? How were they chosen?

The Department of Parks and Recreation and the Department of Neighborhoods suggested that the steering committee guiding this design process be comprised of individuals and neighbors with varied interests in the park. Sustainable Magnolia gathered the group. Most of those on the steering committee did not know each other before this process began, though all were involved in the community; eager to engage the community in a design process that would revitalize this park. All were volunteers.

Did the first MMP Steering Committee design the new Park?

1) Putting together a plan to advertise and hire a consultant in an open process, as per the conditions of the Department of Neighborhoods grant.

2) To create a web-site (www.MagnoliaManorPark.org) for information to be kept and obtained by the public regarding the process.

3) To advise the consultant regarding the issues to be considered in setting up a community process to gather feed-back from neighbors and stakeholders in designing the park elements.

4) To help advertise and run the community workshops/meetings

5) Enable as much involvement from the community as possible.

The Steering Committee members, as individuals with their own interests for the park, gave input about their desires for the Park Site Plan with all others of the community at the public meetings/workshops in the public process.

What is the Department of Neighborhoods?

“Seattle Department of Neighborhoods works to bring government closer to the residents of Seattle by engaging them in civic participation; helping them become empowered to make positive contributions to their communities; and by involving more of Seattle’s underrepresented residents, including communities of color and immigrants, in civic discourse, processes, and opportunities” (From http://www.seattle.gov/neighborhoods)

What is a Small and Simple Grant?

“The Neighborhood Matching Fund (NMF) program was created in 1988 to provide neighborhood groups with City resources for community-driven projects that enhance and strengthen their own neighborhoods. All projects are initiated, planned and implemented by community members in partnership with the City. Every award is matched by neighborhoods’ or communities’ resources of volunteer labor, donated materials, donated professional services or cash.”

“The Small and Simple Projects Fund provided awards up to $20,000 to support community members in building community relationships around a project. 1) Provide a public benefit and be free and open to all members of the public. 2) Emphasize self-help, with project ideas initiated, planned and implemented by the neighbors and community members who will themselves be impacted by the project.3) Demonstrate community match. 4) Occur within the Seattle city limits.”

“Core to NMF is the contribution of community match – volunteer labor, donated materials, professional services and/or cash from community members –awardees must raise to match the City’s award.” http://www.seattle.gov/neighborhoods. Laurie Ames from the Department of Neighborhoods was assigned to assist the original steering committee in carrying out the requirements of the grant.

What is the role of the Department of Parks and Recreation at Manor Park?

What is the role of Seattle Public Utilities (SPU) at Manor Park?

SPU is the owner of the land where Magnolia Manor Park is sited. SPU approves any site plan for the park; protection of the reservoir is foremost.

What is the role of the Emergency Preparedness Committee (EPC) at Manor Park?

EPC, originally a sub-committee of the Magnolia/Queen Anne District Council, looks to Magnolia Manor Park as a potential ham radio transmission site and a communications hub site for emergencies/natural disasters.

What was the role of the Landscape Architect hired by the original MMP Steering Committee?

Site Workshop LLC (siteworkshop.net) was selected for the Site Plan design through a competitive and open selection process. Site Workshop LLC did facilitate and document a public feedback and review process, through four community meetings, comments submitted on the website, and an online survey, synthesizing the results into draft and preferred schematic site plans.

Three conceptual plans were reviewed and approved by Seattle Parks and Seattle Public Utilities (SPU) with community input, and further refined into the Preferred Site Plan.

The Plan will be used as a guide for future project implementation.

Who serves on the FMMP Steering Committee and how were they selected?

Toward the end of the completion of the first grant, a sub-committee of the Steering Committee formed to keep the momentum going and realize the Preferred Site Plan. This group became the Friends of Magnolia Manor Park (FMMP) Steering Committee and applied for/received a second Department of Neighborhood’s Small and Simple Grant Award; continuing the work that had already been accomplished by the original MMP Steering Committee.

These folks worked to take the design created during the initial “Schematic Design” phase closer to actual implementation. Some continued from the original steering committee, others volunteered or were asked to serve by original members who came to know them through their participation in the development of the Preferred Site Plan. Most members are residents of Magnolia and live a short distance from the park.

What the FMMP Steering Committee did to get the Preferred Site Plan designed and built?

FMMP started fundraising to develop park elements in June 2011. The community response was incredible; $55K in donations, $60K in grants and $130K in levy money, plus in-kind donations. Fundraising to complete the park continues.

How much of the Preferred Site Plan has been built?

A 20,000 square foot OLA, with a separate small/shy dog area, opened in November 2012. The OLA finished probation, was evaluated and made permanent in November 2014. Volunteer stewards and work parties maintain the OLA.

The P-Patch opened in April 2013 with 65 plots. This is the first P-Patch in Magnolia and has a waiting list. Funding for the P-Patch came from the 2008 Parks Levy, a NMF grant, donations, and major construction work by a team of volunteers. The P-Patch is maintained by volunteers--those with plots.

The fifth-grade students from Lawton Elementary and Catherine Blaine schools were involved in the public process developing the park plan through a design charette. The students envisioned a mountain bike gravel path, climbing boulders and a zip line for the east hill. The Lawton fifth-graders produced art work for the park and raised the money for the project. The art was on display at Manor Park. In 2013 the fifth graders grew plants at the P-Patch.

In September 2013, the Seattle City Council approved the 2008 Parks Levy Opportunity Fund proposal from the FMMP Steering Committee. In this third phase the Preferred Site Plan implementation will connect the OLA and the P-Patch and open up the historic entrance on 27th Avenue West. The project includes fence relocation south of the reservoir, a path from 27th Avenue West, improved landscaping north of the reservoir and a possible view point in the NE corner. In 2014, Parks held public meetings regarding this project. Parks has refined the design and will develop early stage design documents for review. The goal is to complete design, permitting and bid early in 2015 for construction during spring/summer of 2015.

The ultimate goal of the FMMP Steering Committee is to complete the community-developed Preferred Site Plan including the ADA path around the reservoir.