Steering Committee Meetings: The Friends of Magnolia Manor Park (Steering Committee) meets monthly or as needed. These meetings are open to the public. If you wish to attend, email info@MagnoliaManorPark.org for the meeting location.

Opportunity Fund Project: The project is still on track for 2016. Contractors visited the park, submitted bids and Parks chose a contractor. There is a slight hiccup about the disposition of one bid and one contractor has appealed. The bid process is currently being reviewed.

SPU is slated to move and add new fencing that opens the SW corner and encloses the reservoir. Initial information stated this would happen in July. THE SURVEY STAKES ARE IN PLACE FOR THE NEW FENCE AROUND THE RESERVOIR!

A letter of intent was submitted to the Seattle Parks Major Project Challenge Fund earlier this year. Recently, FMMP was informed that Magnolia Manor Park did not make the cut for this funding.

Currently, FMMP has completed a draft application for the Department of Neighborhoods Small and Simple Fund which is a matching fund. The submittal date for this application is September, 2016. Donations and signatures of support for opening the East Hill are being gathered now.

Magnolia Summerfest August 5-7: The Magnolia Chamber which sponsors Summerfest has graciously offered free booth space to all community-based organizations. FMMP has an opportunity to engage the public about Magnolia Manor Park and the Preferred Site Plan. Volunteers are needed to staff the booth! Please email info@MagnoliaManorPark.org for more information. Your volunteer hours are key to showing community support on the DON Small and Simple application discussed in the preceding section.

Seattle Mayor Cuts Ties to Neighborhood District Councils: The Neighborhood District Councils were created as a result of community grass-roots meetings over 30 years and have been part of the Department of Neighborhoods. Each council had a District Coordinator, a DON employee, who helped volunteer council members navigate the City government and departments. FMMP has been a member of the Magnolia/Queen Anne District Council since 2013. This grass-roots group of all volunteers has worked for and represented our neighborhoods of Magnolia, Interbay and Queen Anne for many years. Legislators, the City Council, SDOT, Metro, Parks, the Port, and many more, have presented at MQADC meetings. Local citizens have pitched neighborhood projects or problems for funding opportunities.

The Mayor has cut ties with the entire district council system. The district councils may continue to exist as volunteer groups but without any City support or staff. Several studies of the council systems has produced list of updates (digital and social media engagement) and areas to improve (members of color, renters, etc.). Rather than working with an existing system to make changes, the Mayor stated the existing council members did not represent Seattle: too many homeowners, old, white and retired. Even though each of those members represents an entire group of people (such as Magnolia Manor Park) who are more representative.

The Mayor is starting from scratch with a new un-named method of outreach and engagement created by the Department of Neighborhoods; announcement of system on September 26, 2016. A new commission to engage the under-represented in Seattle will be formed and members appointed by the Mayor. This is very much in conflict with the “Seattle Process.” Like it or hate it, Seattle loves public meetings and process; real grass-roots opportunities for regular citizens to impact our government.

Currently, the local district councils are meeting to discuss this situation and the blatant disregard for so many council members who volunteer innumerable hours for their neighborhoods. A special meeting of the Magnolia/Queen Anne District Council Executive Committee will be held on August 15, 2016. The next regular meeting will be Monday, September 12; location to be determined.

Author: LISA MEOLI is a board member of the Magnolia Historical Society and an Environmental Historian at Floyd|Snider.

See the herons before they leave the nest! 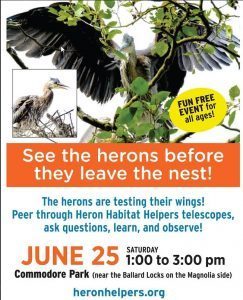 What will happen when

Strategy for getting Parks support for project 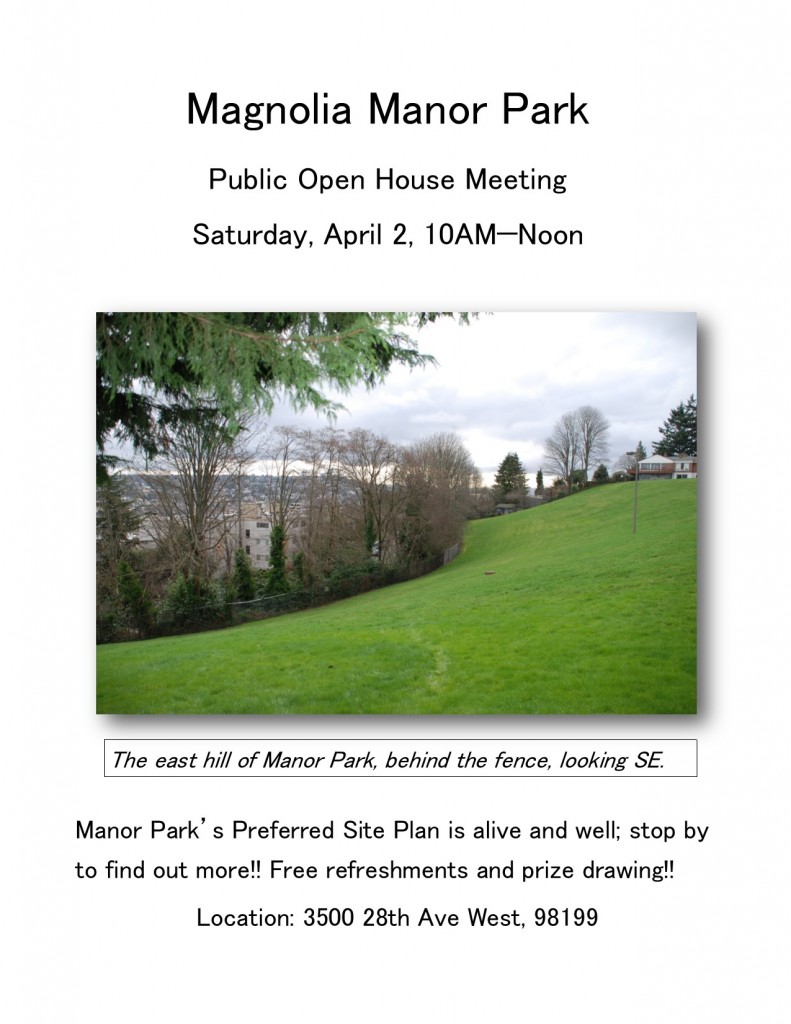 NEXT Steering Committee Meeting: The next Friends of Magnolia Manor Park Steering Committee is scheduled for Wednesday, February 10, at 7PM. These meetings are open to the public and held in a private home. If you wish to attend, go to www.MagnoliaManorPark.org and choose CONTACT.

UPCOMING Neighbor Appreciation Day: On Saturday, February 13, from noon to 2PM, the Magnolia Community Center will host Neighbor Appreciation Day! Magnolia Manor Park will have a table at this event. Curious about the 2011 Preferred Site Plan for the park? Excited by new green space in Magnolia? Looking for a volunteer opportunity with flexible commitment? Please stop by and visit.

To mitigate the security concerns of the local neighbors, Superintendent Aguirre stated that lighting for the path is possible. Project Manager Farrell described the potential path lights which would be directed and shielded to illuminate the path only. These lights would be funded separately from the Opportunity Fund grant.

In further discussion between Parks staff, Manor Park neighbors and FMMP Steering Committee members, Superintendent Aguirre indicated that Parks is amenable to the completion of the Preferred Site Plan; specifically the remaining east hill. Costs would include research, planning and development of the east hill per the Preferred Site Plan design. Project Manager Farrell estimated that the east hill project may cost approximately $750K or more to plan and construct.

A new funding source, Seattle Parks Major Project Challenge Fund, may be available to Manor Park. David Grave, Senior Park Planner, in a separate email stated that the FMMP Steering Committee may submit a letter of intent for this Challenge Fund. Although this fund is designed for $2 million plus projects, lesser sums may be available. Many volunteer hours and fundraising would be required as this type of fund requires a 50% match by the citizens group; e.g. $250K match for $500K grant.

These meetings are open to the public and held in a private home.

If you wish to attend, choose CONTACT and complete the form for more information. 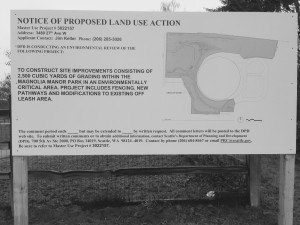 The neighbors’ concerns are about safety once the SW corner of Magnolia Manor Park is opened up with this current Opportunity Fund project. The existing six-foot perimeter fence that abuts the neighbors’ property lines will remain; protecting these properties from the rear. A possible solution to mitigate security concerns in this SW park corner might be motion-detector lights. Such lighting is expensive, Parks must approve and likely fundraising would be required; working together, this can happen!

Several neighbors stated, they would prefer that the whole park project, with the complete path circling the reservoir, be constructed at once. Unfortunately, the costs for work on the east hill are quite high. The money currently available (Opportunity Fund grant) is enough for 75% of the path, relocating fences, landscaping and other associated construction. Once complete, our attention will focus on fundraising for the east hill section!!

Thanks to everyone for all of your support for Magnolia Manor Park. The Preferred Site Plan will become a reality with such great community support!!

The P-Patch at Magnolia Manor Park has great news!!

Our P-Patch donates to El Centro de la Raza; thanks to all who grew, donated, harvested and delivered our produce!!

DID YOU KNOW YOU CAN NOW DONATE ON-LINE?

We’re pleased to announce we can now accept your online donation. The link below will take you to Network for Good on behalf of P-Patch Trust.

IMPORTANT–PLEASE NOTE!
On the donate page you will see a section “Designation Optional”. Make sure you enter Magnolia Manor Park in the Optional box. It will end up looking like this: Click to donate below.

Stay up to date